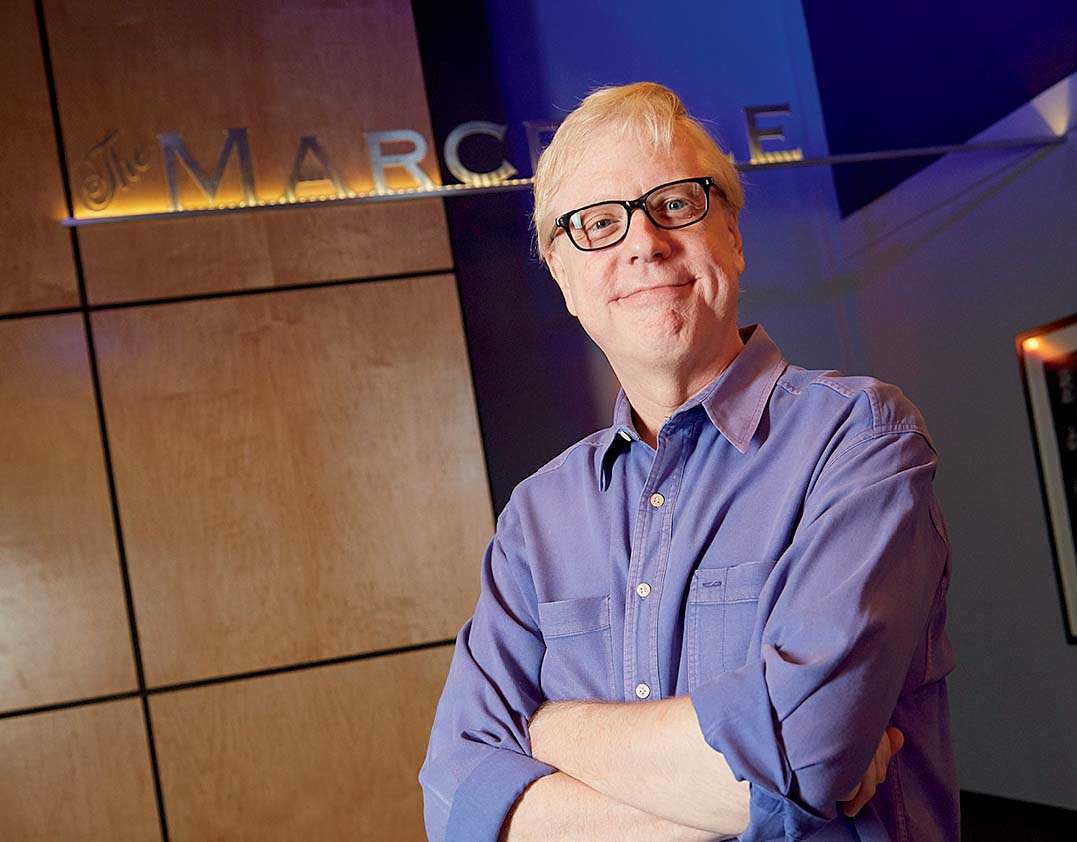 Artistic Director Scott Miller has been directing musicals since 1981, and he founded New Line Theatre in 1991. He has written the book, music, and lyrics for nine musicals, as well as two non-musical plays. His play Head Games has been produced in St. Louis, Los Angeles, London, and at the Edinburgh Fringe Festival in Scotland. His 2006 musical Johnny Appleweed was nominated for four Kevin Kline Awards.

He was honored in 2014 with a St. Louis Theater Circle Award for his body of work with New Line, and American Theatre magazine wrote, "Miller is, in his quietly ornery Midwestern way, advancing and reifying the American musical-theatre form as it has come kicking and screaming into the 21st century."

The Riverfront Times honored Miller as the best director in St. Louis in 2015, writing "Some directors strive to entertain, some seek to tell a coherent story. Very few directors believe it is their calling to channel the playwright's work as a shaman would summon spirits from the other world. Scott Miller falls into this last camp. Mining the fertile fields of the musical, Miller goes into the dark to bring back insights about character, mise en scène and authorial intention — and then presents them to audiences in a different darkened space. His productions are indeed entertaining and coherent, but they also tell us something about who we are as a culture right now. Miller's staging of Jerry Springer: The Opera confronted us with our love for spectacle and the grotesque, while skewering our long-held belief that we as a nation always hold the moral high ground. His production of The Threepenny Opera savaged our complacency in the face of ongoing, widespread corruption in our government institutions. What's most impressive is Miller's habit of pulling back the curtain on his process at his blog, newlinetheatre.blogspot.com, where you can see him think through the show from the first rehearsal through tech nights, on to opening night and right through the final performance. Miller always has his mind on what each show is about and what it says, and how he can bring that message to the people. He lives and breathes musical theater, and every New Line production demonstrates the value in his dedication."

The Riverfront Times also did a feature-length story about Miller for the opening of New Line's 25th season in 2015.

Miller has written several books about musical theatre, including From Assassins to West Side Story; Deconstructing Harold Hill; Rebels with Applause; Let the Sun Shine In: The Genius of HAIR; Strike Up the Band: A New History of Musical Theatre; Sex, Drugs, Rock & Roll, and Musicals; Literally Anything Goes; and Idiots, Heathers, and Squips. He has written one novel, the vampire story In the Blood (based on his musical of the same name), the novelty book It's a Musical!: 400 Questions to Ponder, Discuss, and Fight About; and he's contributed to five other books, including Stephen Sondheim: A Casebook.

For fifteen years, he co-hosted the radio show Break a Leg: Theatre in St. Louis and Beyond on KDHX, and now he hosts the theatre podcast Stage Grok, available on iTunes. Miller also writes for newspapers, national theatre magazines and arts websites, and has composed music for film, television and radio.

Before starting New Line Theatre, Scott ran CenterStage Theatre Company for eight years, was the development director for Dance St. Louis for seven years, and ran Very Special Arts Missouri for three years. He is a graduate of Affton High School and Harvard University. You can email Scott at Scott@NewLineTheatre.com.

The Bad Boy of Musical Theatre
"Portrait of a Boy" a short artistic autobiography
And As for Fortune, And As for Fame" a post about Scott's earliest musical theatre influences
"Suddenly There is Meaning" a look at Scott's years at the Muny and its influence on his work
"Sex, Drugs, Rock & Roll, and Musicals" a look back at Scott's first rock musicals

Other Quotes from the Press

"I'm constantly amazed at the way New Line Theatre is able to find so many hidden gems among the countless shows that play on or off Broadway, exposing all of their true beauty and charms in newly imagined stagings. You begin to wonder how critics could be so misguided in their initial assessments, but then you begin to realize that artistic director Scott Miller truly understands, and takes the time to dissect, the reasons behind a good show's commercial failure. And then he fixes it."– Chris Gibson, BroadwayWorld

“When it comes to challenging St. Louis theater audiences, to stretching them, exposing them to new stimuli, hardly anyone is in a class with Scott Miller.” – Joe Pollack, KWMU-FM

“Scott Miller's productions always are small in scale, but the imaginative scope of these recent shows has impressive depth. . . [Into the Woods] offers perspective instead of self-indulgence, imagination instead of ego.” – Judith Newmark, St. Louis Post Dispatch

“Director Scott Miller has made his New Line Theatre a St. Louis institution. Besides his deep understanding of musical theatre, Miller's chief gift, I think, is for the gathering of outstanding talent.” – Steve Callahan, KDHX-FM

“Miller has written four marvelous books. If you don't know them, get all of them right now. Right now. Start reading and I'll bet you'll soon agree that Miller is one of our best musical theater minds.” – Peter Filichia, TheaterMania.com

“Miller's insights and analyses are consistently fresh and fascinating.” -- Encore

“I have a feeling from this book [Deconstructing Harold Hill] that there is one American director who is imaginative and daring with his new productions of classic American musicals: Scott Miller. I’ve got to get out to The New Line Theatre in St. Louis.” -- Peter Filichia, Theatre.com

“Miller's opinions are occasionally provocative, and wholly engaging, written from the perspective of a director and a performer. Anyone with an interest in musical theater will be fascinated with Miller's latest work [Rebels with Applause], and the serious aficionado will find new insights to ponder. Above all, this mesmerizing new book will have you thinking and talking about the selected shows like never before.” -- Stage and Screen Book Club

“Miller makes no apology for allowing his own social and political views to influence the discussion of each of his subjects’ themes and content. In fact, it is these highly informed yet robust opinions that are the appeal of his work.” -- Mark Jennett, CultureVulture.com

“His profound disclosures are likely to imbue even the most casual fan with a new appreciation and understanding of musical theatre.” -- Stonewall News Northwest


Scott Miller was one of the participants in a panel discussiion hosted by FUSE Productions, "Are We In A New Golden Age of Musical Theatre?" also featuring Jennifer Ashley Tepper and Peter Filichia, hosted by Richard Biever. Recorded April 8th, 2016, at the Penn State Downtown Theatre, State College, PA.